In order to prepare for this transition NIST offered a “demo server” that Vendors like wolfSSL and FIPS Labs could utilize in standup of the new protocol. Once the transition was completed NIST also setup “production servers” which only FIPS Labs with a trusted certificate issued by NIST can connect to; Production Vectors passing are now the gateway to Algorithm Certification (IE certs like the ones wolfSSL just received!).

Algorithm Certification is a prerequisite to CMVP FIPS 140-2 (and 140-3) validations. This design keeps in place the need for a FIPS lab to achieve algorithm certification but it now allows for Vendors such as wolfSSL to pre-test in advance of requesting production vectors for certification! wolfCrypt has been listed on the CMVP IUT List for FIPS 140-3! We are currently working with our testing lab to get validated as quickly as possible with the new FIPS standard from the NIST. wolfSSL is the first software library on the FIPS 140-3 IUT list for embedded development.

Concurrently wolfSSL is also in the process of developing our own ACVP client based off of the current draft (draft-fussell-acvp-spec-01). Having many algorithms already completing the validation process through the NIST operated ACVP Demo server. Where our test vendor information can be seen publicly listed on the demo site here (https://demo.acvts.nist.gov/home).

ACVP makes testing cryptographic algorithms and modules more efficient than the current method and more automated. There are three main parts to ACVP – a server, a proxy, and a client.

Ultimately an ACVP client communicates with the server to validate cryptographic operations. This includes creating, or referencing meta data such as; vendor, OE, and module information. A simplified message flow for getting an algorithm validated is as follows: 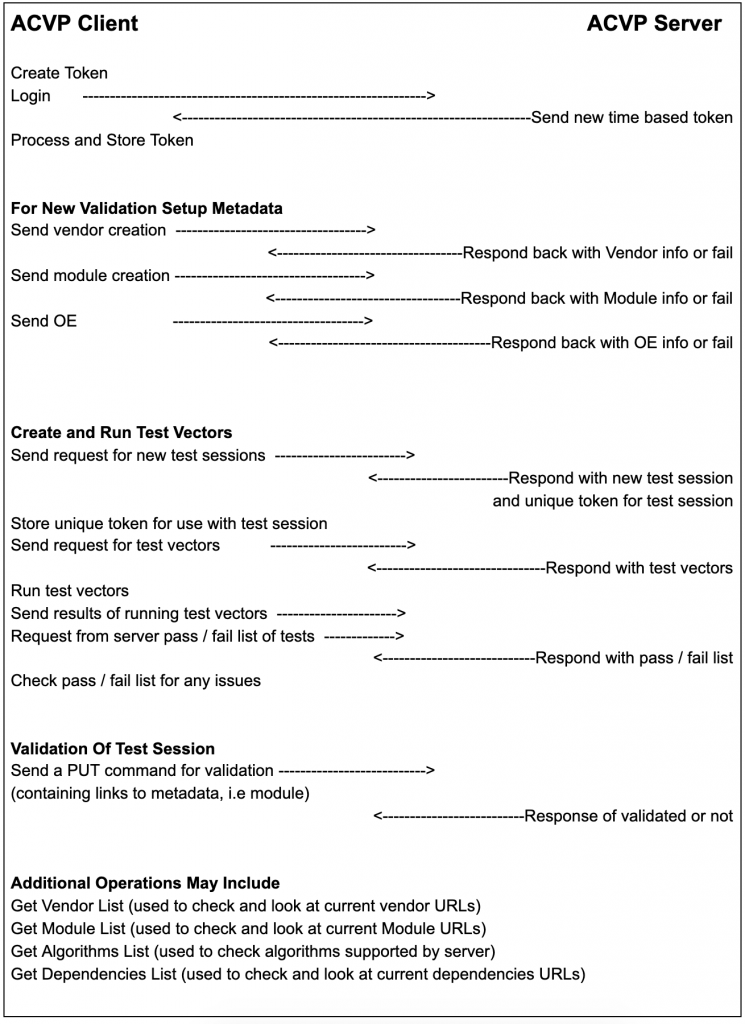 We can assist with your FIPS needs. Contact us at facts@wolfssl.com for questions or more information.

More information from NIST’s website about the ACVP project can be found here:
https://csrc.nist.gov/Projects/Automated-Cryptographic-Validation-Testing.