The wolfSSL ecosystem consists of several software modules and components, each with specific goals and purposes. We make sure all our software products are engineered using the quality standards required by our process.

Each step in the software lifetime is regulated by strict rules and testing criteria (including stringent fuzz based testing) that ensure the detection of defects and regressions in the code very early.

From a software engineering standpoint, the life cycle of the design and development of wolfSSL software components is structured in three steps:

Each step is then verified through a specific set of quality control procedures, including:

In order to improve the safety of the code, and in order to detect potential defects or misbehaviors, additional quality controls are regularly applied to the software modules, in particular tools like static analyzers, dynamic memory diagnostic tools, fuzzers and more, being added all the time.

Distributing the source code under a GPL license and exposing the entire development process publicly on the GitHub platform guarantees that hundreds of users, contributors and people interested in the project are constantly aware about every change in the code, and the conversations generated during code reviews. Corporate security organizations, cybersecurity partners and academic researchers give very valuable contributions by constantly studying new vulnerabilities and carefully exploring the potential attack surfaces that may be harder to identify while writing the code. wolfSSL Inc. takes vulnerability management very seriously and has a precise and detailed checklists to run in case of emergency fix and rapid release.

Due to the constantly changing nature of the specifications, the software design process must be flexible enough to accommodate updates in the algorithm implementation, the usage recommendations and the guidelines to implement secure protocols and mechanisms.

NIST distributes specifications and guidelines through “Special Publications” (SP). Through its collaboration of industry organizations, government agencies and academic institutions the National Cybersecurity Center of Excellence (NCCoE) as part of NIST. Similarly to IETF publications, the approach of NIST consists in releasing frequent updates and amendments to earlier publications, in order to keep the guidelines updated. The process of updating the guidelines within NIST is regulated by the “NIST Cryptographic standards and guidelines development process” (NIST.IR.7977). Cryptographic functions in wolfCrypt follow the latest specifications from NIST regarding algorithms and their implementation process. As explained later, NIST publications and software tools play an important role in the algorithms and modules verification phase.

WolfMQTT is implemented upon the specifications provided by OASIS, initially covering  MQTT version 3.1.1 approved in December 2015. WolfMQTT has since then evolved to support the specifications in OASIS MQTT Version 5.0, approved as the latest MQTT standard in March 2019.

The guidelines for the implementation of cryptography, secure communication protocols and secure firmware updates mechanisms are described by open standards. These standards are maintained and documented by several organizations. WolfSSL software projects import specification documents from three major organizations, namely:

IETF releases new specifications in the form of “Request for Comments” (RFC). These are individually numbered publications which are published after a peer review process, which often requires multiple draft phases. Once a RFC is assigned its unique number, it is never modified again. In order to update a standard track that has been published in a RFC, it is possible to issue a new RFC that may contain amendments, corrections or replacing of existing RFCs that were previously published. Newer RFCs can supersede older ones by making them obsolete or deprecated. RFCs cover the specifications for a large part of wolfSSL communication modules, such as the TLS protocol standard (RFC8446), DTLS (RFC6347), TLS extensions (RFC6066) and several others. The wolfCrypt library follows the recommendations for the implementation of the cryptographic primitives based on the algorithms supported, such as RSA  public-key cryptography (RFC8017), or the ChaCha20/Poly1305 for AEAD (RFC8439) and many others. WolfSSH has been designed and developed upon the specifications of the RFC4250-RFC4254 series, documenting SSH-2 as proposed internet standard. WolfBoot has been initially designed and developed according to the guidelines of the draft-ietf-suit-architecture, which later on became RFC9019.

Most of the software components developed by wolfSSL are in the form of a structured library, with an API oriented design. Once functions are part of the API they will never change their signature, their purpose or the meaning of their return values. This ensures compatibility across different versions of the library. If a feature is added to an existing functionality, a new API function is created, which accepts different arguments, or extends specific interfaces. The API function calls are formally documented in the module user manual.

One of the most important aspects to keep in mind during the design phase is the correct meaning, propagation and verification of the error codes across the different layers of the API. Each error code has unique and well-defined meanings that are explained in the manual. This facilitates the identification of run-time errors in the application using the library.

Due to the dynamic, changing nature of the specifications around cryptography and secure protocols, the design process must adapt accordingly. New specifications are analyzed and integrated in the existing module architecture, ensuring that this does not break existing features by keeping the existing API function signatures immutable in time.

All software at wolfSSL is developed and maintained following the continuous integration practice, via a centralized git mainline repository. All source code is public and accessible at any time during the development, under a GPL license.

The life-cycle of software components in the wolfSSL ecosystem is different from the typical open-source development process, and it is designed to comply with modified condition decision coverage (MC/DC) process. WolfSSL owns and maintains the entire code base, which means that there are strict rules in place regarding changes and updates of the mainline. Modifications to the repositories are only allowed by wolfSSL engineers, who also have to comply with a strict peer-review policy before any change is merged into the master branch.

To contribute to wolfSSL repositories, a developer must submit a “pull request” through GitHub. The request is then reviewed by one or more wolfSSL engineers (depending on the size, the impact and the nature of the patch). This often results in requests for alignment with the purposes in the design documents, changes in the code, re-adaptations and improvements before the code is accepted for merging. Only approved contributors are allowed to submit their code to review. Contributors outside the wolfSSL engineering team must be approved beforehand before the code is considered for inclusion. 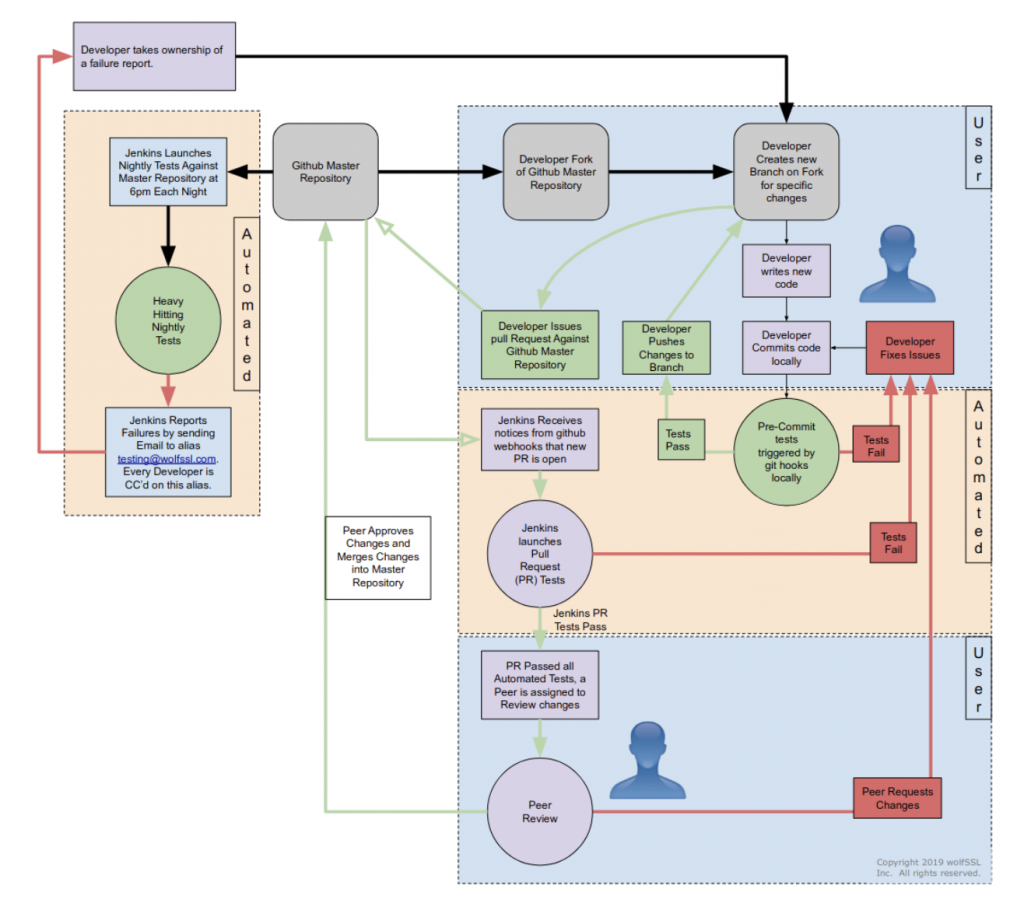