Our new support includes hardware acceleration of the following algorithms:

The new functionality can be enabled by defining WOLFSSL_SILABS_SE_ACCEL. In user_settings.h More details are available in the README.md in wolfcrypt/src/port/silabs of the wolfSSL tree. 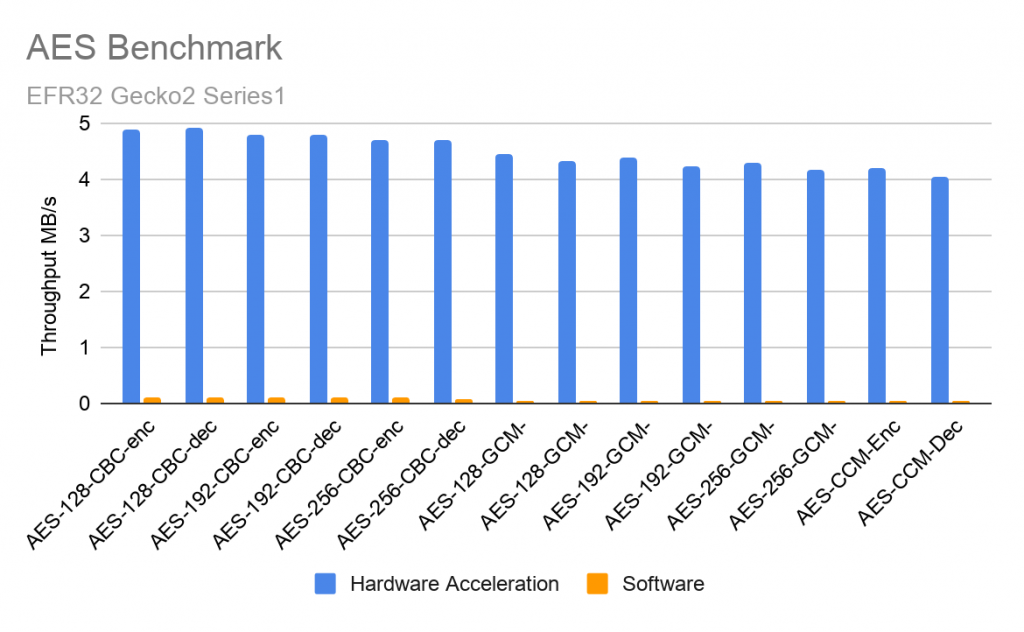 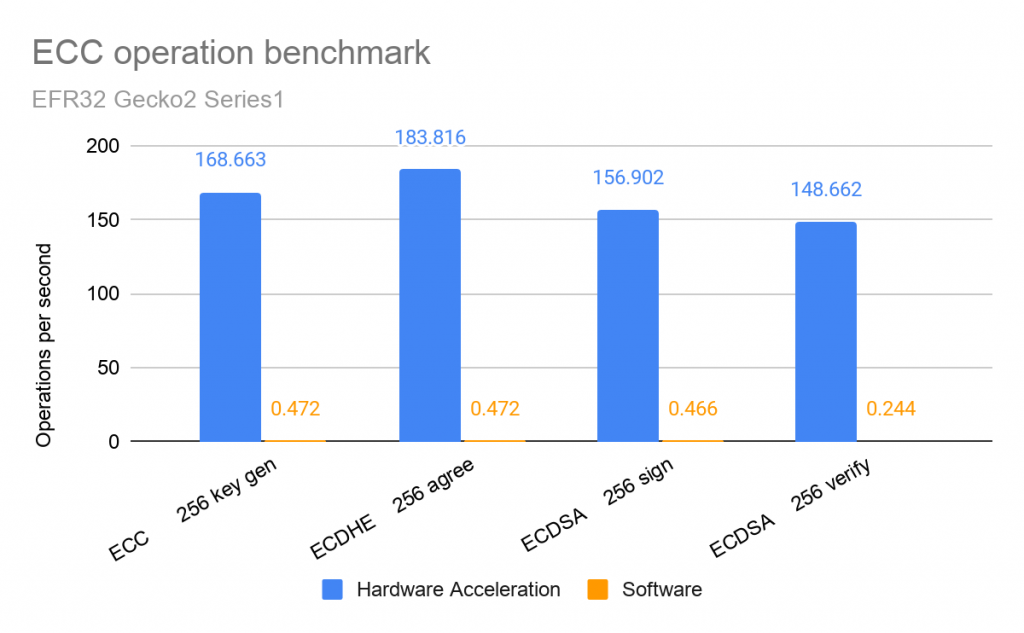 Please contact us at facts@wolfssl.com  with any questions you have on wolfSSL, or just give us a call!

With wolfSSL 4.6.0, the cisco/libest EST library has been ported to work with wolfSSL. The Enrollment over Secure Transport (EST) protocol defines “enrollment for clients using Certificate Management over CMS (CMC) [RFC5272] messages over a secure transport.” It uses TLS >1.1 and the Hypertext Transfer Protocol (HTTP) to facilitate secure and authenticated Public Key Infrastructure (PKI) Requests and Responses [RFC5272]. libest is a client and server EST implementation written in C.

To obtain a copy of libest that is compatible with wolfSSL, please contact us at support@wolfssl.com.

Once you have a wolfSSL compatible version of libest, to build the library:

To run the tests in test/UT configure wolfSSL instead with:

The porting of libest to wolfSSL has greatly expanded the compatibility layer. Many new API’s were introduced and old ones have been updated. Additionally, Certificate Signing Request (CSR) generation and parsing has been expanded to meet the needs of the libest library. Some of the new changes include:

Feel free to contact us at facts@wolfssl.com for additional information and help with using the new features of wolfSSL 4.6.0. These features were added in commit 814ed3f5a68d37dec4ee91e6dace35c7343eec36.

The wolfSSL examples have been updated to test exchanging application data during a secure renegotiation. To enable and test this new feature, build wolfSSL 4.6.0 with the following commands:

To run the same tests with DTLS add --enable-dtls to the configure parameters and add -u to both of the example parameters:

Users who use secure renegotiation must also expect and handle a new error value. wolfSSL TLS API’s (wolfSSL_connect, wolfSSL_accept, wolfSSL_read, wolfSSL_write) may now return a failure and set the error code to APP_DATA_READY (retrievable by wolfSSL_get_error). This signals to the user that wolfSSL has received application data during a secure renegotiation. The user should immediately call wolfSSL_read to retrieve the received data. If wolfSSL_read is not called immediately after receiving the APP_DATA_READY error code then the data may be dropped if new application data is received. This applies to both TLS and DTLS.

Please see the example/client/client.c and example/server/server.c files in the wolfSSL directory as a reference for how the APIs may be used. Contact wolfSSL at facts@wolfssl.com with any questions or comments!

We recently validated the compatibility of our “meta-wolfssl” layer with Yocto 3.0 Zeus, and also updated our wolfSSL recipe to match our newest 4.6.0 release! We offer recipes for wolfSSL, wolfSSH, wolfMQTT, and wolfTPM, all available for Yocto Project or OpenEmbedded based projects.

Adding the wolfSSL products to your project happens in just three steps:

Last, build your preferred target using bitbake and the resulted image will have:

If you have questions about using “meta-wolfssl” in your project, or need tips on getting started with your build, email us at facts@wolfssl.com.

One of the features included in the new wolfSSL 4.6.0 release is support for RC2-ECB/CBC and its integration into wolfSSL’s PKCS#12 functionality.

RC2-ECB/CBC has been added to wolfCrypt for users who have backwards compatibility requirements and may need to interop with older existing applications or devices. This feature is disabled by default and can be enabled with the “--enable-rc2” configure option.

Contact us at facts@wolfssl.com with any questions, or for assistance getting started with wolfSSL in your project!  The wolfSSL embedded SSL/TLS library supports TLS 1.3, FIPS 140-2 and 140-3, DO-178, and more!

My name is Robert Hörr and I am working as a penetration tester at Deutsche Telekom Security GmbH. Pentesting is mostly done on security software, as for instance the wolfSSL TLS library to discover issues like the Heartbleed bug of OpenSSL. I have discovered some issues in the wolfSSL TLS library (see https://www.wolfssl.com/docs/security-vulnerabilities) using my own developed TLS-FAST (Fast Automated Software Testing) framework. In the future my goal is to provide our customers a FAST service to test their software products.

Why are TLS libraries tested?

It is important to check TLS libraries because TLS is one of the most deployed security protocols in the Internet. Typically, there is no client authentication on a standard Internet server by default configuration, to ensure that every Internet user can use it. Hence, any vulnerability in the TLS protocol implementation can be exploited easily. There are many TLS vulnerability entries in the public CVE list and the number is growing constantly.

Which testing approach is used?

The wolfSSL TLS library is a constantly growing project, with more and more functionalities, extensions and TLS versions added to its scope over time. This offers wolfSSL customers maximal flexibility in the use of the wolfSSL TLS library. Because of this growing process, the source code gets more complex. It is hardly possible to check all code paths by a manual source code review. Hence, dynamic automated machine testing must be performed. An efficient way to perform this kind of testing is the code coverage fuzzing approach. This fuzzing variant allows to discover all code paths. The discovering speed depends on the available computing resources. The code paths are checked systematically for memory leaks, buffer overflows, logical issues and so on.

Which tools are used for TLS testing?

Several open source fuzzing tools, which are based on this fuzzing approach, are public available. Some of the most popular ones are AFL, LibFuzzer and HonggFuzz. The community discovered many issues using any of them. Each of these tools has its strengths in certain fuzzing areas, for example HonggFuzz has a higher number of executions per second than the other tools. To benefit from all fuzzers at the same time, I have developed the FAST (Fast Automated Software Testing) framework for TLS libraries, which combines the strengths of several fuzzing tools. Over the time, the following features and approaches have been added to this framework:

How is the wolfSSL TLS library tested?

Currently I am using the TLS-FAST framework for checking the API functions wolfSSL_accept(…) and wolfSSL_connect(…) of the wolfSSL TLS library master branch. This master branch gets the newest updates first. So the master branch must be tested to discover the newly added issues from the updates and to avoid that these new issues are linked into a stable version.

Most issues I have found (see https://www.wolfssl.com/docs/security-vulnerabilities) are located in the parsing process of the TLS messages client_hello and server_hello. These issues were buffer overflows or uninitialized memory. They could be fixed easily by simply adding a sanity check or a memory initialization. For the sake of completeness, it should also be mentioned that the wolfSSL TLS library source code includes about 521,655 lines of code (without comments and blanks). Hence, it is not easy to avoid issues without fuzzing.

What will be fuzzed in the future?

My goal is to provide our customers a FAST framework as a testing service for their software products. This service detects all issues as quickly as possible.

Contact wolfSSL at facts@wolfssl.com with questions about the wolfSSL embedded SSL/TLS library, or to get started with wolfSSL in your project!  wolfSSL supports TLS 1.3, FIPS 140-2/3, DO-178, and much more!

The Christmas release of wolfSSL is available! Get your version 4.6.0 copy by visiting the downloads page on wolfSSL’s website or checking out the release sections on our GitHub repository. A lot of engineering and exciting additions happened in this release. Some of our recent blogs have touched on the new features, this release had our Linux kernel module support, Apache httpd TLS 1.3 support, hardware acceleration additions for the NXP DCP (i.MX RT1060/1062) crypto co-processor, Silicon Labs hardware support and many more new features.

A full list of items in the release can be found in the bundled README.md but the following are a few of the notable changes:

END_OF_DOCUMENT_TOKEN_TO_BE_REPLACED

FIPS 140-2 requires the use of validated cryptography in the security systems implemented by federal agencies to protect sensitive information. The wolfCrypt Module is a comprehensive suite of FIPS Approved algorithms. All key sizes and modes have been implemented to allow flexibility and efficiency.

The National Institute of Standards and Technology (NIST) is sending FIPS cert #2425 into sunset June 2021. For customers who will be impacted, the wolfCrypt Cryptographic Module maintains its #3389 certificate and can be used in conjunction with the wolfSSL embedded SSL/TLS library for full TLS 1.3 client and server support. Upgrade your FIPS cert with wolfSSL to stay afloat and benefit from:

Contact us to upgrade to FIPS cert #3389 at fips@wolfssl.com.

For a list of supported Operating Environments for wolfCrypt FIPS, check our FIPS page: https://www.wolfssl.com/license/fips/

wolfSSL is currently the leader in embedded FIPS certificates. We have a long history in FIPS starting with wolfCrypt FIPS 140-2 Level 1 Certificate #2425 as well as wolfCrypt v4 FIPS 140-2 Level 1 Certificate #3389. wolfSSL partners with FIPS experts KeyPair to bring you FIPS consulting services, and high assurance along each step of your FIPS certification process. Additionally, wolfSSL will be the first implementation of FIPS 140-3.

wolfSSL also provides support for a wolfCrypt FIPS Ready version of the library! wolfCrypt FIPS Ready is our FIPS enabled cryptography layer code included in the wolfSSL source tree that you can enable and build. You do not get a FIPS certificate, you are not FIPS approved, but you will be FIPS Ready. FIPS Ready means that you have included the FIPS code into your build and that you are operating according to the FIPS enforced best practices of default entry point, and power on self test.

The wolfSSL team is happy to announce support for the latest version of Apache httpd, 2.4.46, with both our standard and FIPS-compliant code. In addition to building wolfSSL with --enable-apachehttpd, users will also need to add --enable-postauth.

To support this latest version, we have added new OpenSSL compatibility functions to wolfSSL, updated our Apache httpd documentation, and provided patch code for httpd to make it play with wolfSSL. Please contact us for access to our Apache patch files. Importantly, Apache with wolfSSL also supports the latest and greatest TLS version, TLS 1.3.

Don’t hesitate to reach out to facts@wolfssl.com or raise an issue on our GitHub page if you have questions or suggestions!

Big news for Linux kernel module developers with crypto requirements! wolfCrypt and wolfSSL are now loadable as modules in the Linux kernel, providing the entire libwolfssl API natively to other kernel modules. For the first time on Linux, the entire TLS protocol stack can be loaded as a module, allowing fully kernel-resident TLS/DTLS endpoints with in-kernel handshaking.

Configuration and building is turnkey via the new --enable-linuxkm option, and can optionally be configured for cryptographic self-test at load time (POST). As with library builds, the kernel module can be configured in detail to meet application requirements, while staying within target capabilities and limitations. In particular, developers can opt to link in only the wolfCrypt suite of low level cryptographic algorithms, or can include the full TLS protocol stack with TLS 1.3 support. When configured for AES-NI acceleration, the module delivers AES256-GCM encrypt/decrypt at better than 1 byte per cycle.

The kernel module configuration leverages our new function-complete “single precision” bignum implementation, featuring state of the art performance and side channel attack immunity. Watch this space — we’ll have a lot more to say about the many advantages of our new bignum implementation!

As a proof of concept, we have retargeted the Linux WireGuard kernel module to use wolfCrypt for all cryptography, with full interoperability, and will soon be sharing more on those results. Kernel module builds of libwolfssl will be supported in wolfSSL release 4.6, and are available immediately in our mainline github repository, supporting the 3.x, 4.x, and 5.x Linux version lines on x86-64.

For more information about wolfSSL, contact us at facts@wolfssl.com.